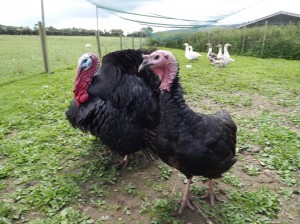 Our flock is descended from the traditional Norfolk Blacks Turkeys from Norfolk rather than the more commercial strains that are available.  They don’t grow quite as quickly but have a better flavour.

These are large birds, apart from their brains – which seem to be smaller than that which is required.  They are so ugly they are beautiful.  At present we have a breeding flock one boy and two girls.  Leader of the flock is Esmerelda.  She is accomplished at flying and generally has to be prodded down from the shed roof at night. The furthest she has flown is across the lane and over 2 hedges.  Flying and landing is not easy and is more a (controlled?) plummet.  The wingspan of a turkey is around 5′ and one flying is something to behold !

We also had Poser who lived in the front garden.  He had a bad foot which meant that he couldn’t manage his allotted task in life.  He was nearly 6 and quite enjoyed his Christmas’.  Sadly Poser died shortly before Christmas 2012 – of natural causes and no, we didn’t eat him !

Poser in a good mood