We have a pedigree flock of Portland sheep – the Colhayne flock.  The breed originated on Portland in Dorset.  They became rare, almost to the point of extinction in the 1900’s but since the 1970 have made a comeback and whilst still rare are now popular with smallholders.  The ewes produce red/brown lambs (usually singles) and are very good mothers, protective but not aggressive.  They thrive on bad grass/land which commercial sheep can’t manage and we have to be careful not to feed too many sheep nuts as we have found they get fat on them very quickly.

We started in 2005 with five ewe lambs partly purchased as a leaving present from a previous job.  We then bought in three older in-lamb ewes and we have gone on from there.  Now we have 15 ewes and one ram (Lenny).  The boys are raised until they are two when they go to produce superb mutton and the girls are sold for breeding or go into our flock.  The lambs are really too small to eat as lamb.  They are a very friendly, trusting sheep and don’t seem to have the yearning to escape that the Welshes do !

The fleeces produced in our flock are long (up to 6″) and come up white and very fine and silky when washed making them very good for spinning.

Our oldest ewe, Melissa, was born in 2000.  Sadly she lost her lamb last year when she got bloat, hopefully she will get in lamb this year.   She is old and possibly a bit arthritic but still ambles round the field happily.

Lenny our ram is a bit of a superstar with a magnificent head and horns and is big for a Portland.  He is very fertile and takes great pride in looking after the girls in his flock.  He passes on his long fleece to his offspring.  We have occassionally crossed him with commercial sheep which has had the advantage of very easy lambing and offspring which can be eaten as lamb.  He is available for hire as we have his daughters in the flock. 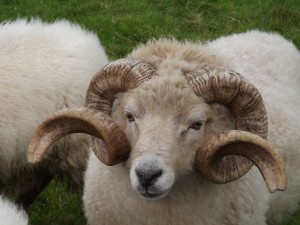